It isn’t easy finding Chris Brown online. Even if you dig deep past the heap of tabloid stories that still circulate around the (in)famous singer-songwriter, you have to weed through football players, reporters, and writers; professional hockey players; rugby assistant coaches; and Pokémon managers—and those are just the eight different Chris Browns who are already verified on Twitter. To search for the second-year college hockey player, you have to keep going on down from there.

But ask the parents of the Boston College forward, and you’ll have to search for a different name. “We call him Christopher, I know you guys always try and shorten it.” Maureen Brown, the mother of Christopher (not Chris), the sister of New York Giants co-owner John Mara, and a BC alumna, laughed after she said it, but stood by her words. And, indeed, searching ‘Christopher Brown’ may still point to the American R&B singer, but the redheaded college kid isn’t far below.

Ask Chris/Christopher himself, though—or at least kindergarten-age Chris/Christopher—about which he’d prefer, and you would have gotten a whole different answer. “Brendan Shanahan,” the 5-year-old responded to the kindergarten teacher who just wanted to get him to answer a question. Christopher wasn’t having it—he wanted to be a guy who stepped on the ice, not one who could draw triangles or add 2 and 2 to 4. In this case, Christopher identified as an eight-time NHL All-Star, at the time playing with the Detroit Red Wings—right alongside Doug Brown, Christopher’s father and also a BC alumnus.

If you take a look at Christopher’s family tree, it shouldn’t come as a surprise that he’s ended up where he is. His parents weren’t the only ones to attend BC. Five of Maureen’s 10 siblings made their collegiate home in Chestnut Hill, and six of them also married BC alumni. Christopher’s three older siblings have come to BC—his only brother, Patrick, captained the hockey team during the 2013-14 season and currently plays for the Carolina Hurricanes—and a cousin started as a freshman this fall. His uncle, Greg, followed his father to the Heights as a student in the ’80s, and eventually returned as men’s hockey’s associate head coach under Jerry York.

“I don’t know how many cousins and aunts on the other side go here, but double digits,” Christopher said. “Been in the family for a long time, and I love it. It’s a great school.”

That isn’t to say he was forced down the pipeline to BC. He had offers to play at other schools, including offers from DI college programs for lacrosse. But according to his mother, it wasn’t going to be anything but BC. And it was certainly going to be hockey.

Even before the kindergarten episode, Christopher had made his intentions clear. As a very young child, he had problems with his ears, which led his mother to keep him away from noisy ice rinks. But at home, 3-year-old Christopher managed to stumble upon his older brother’s hockey equipment in the family’s garage. The natural hockey player began to get dressed in the gear—but not before playing with his parents’ phone and accidentally speed-dialing the fire department. When Maureen came up from her workout in the basement, she found firemen who had broken down the door to get to a toddler dressed and ready to take the ice. Except, of course, that he couldn’t manage to buckle the snap of the roller blades on his feet.

From then on, Christopher has been fully attuned to the world of hockey. It didn’t hurt that the rest of his life also revolved around the sport. Both his dad and uncle played hockey for the Eagles. Greg played a few years in the NHL before bouncing around leagues in Europe. Doug, however, played 15 seasons for the New Jersey Devils, Pittsburgh Penguins, and, of course, Red Wings, the last of which he still played for when his second son was born. Christopher took advantage.

When he wasn’t sleeping, he was normally at Joe Louis Arena, the home of the organization that won the Stanley Cup in 1996-97 and 1997-98. He often visited the locker room and went on pregame skates or after-skates with his dad and brother.

If he couldn’t make it to the pro rink, his mother would take him and another little local kid, Shane Switzer—currently a defenseman for Boston University—to the Birmingham Rink, just a short drive from his hometown of Bloomfield Hills, Mich. There, they played 2-on-2 or 3-on-3 with other 4-and 5-year-olds, all of whom could skate better than walk.

If he couldn’t get a ride anywhere, Christopher had only to step out back. His father and a few handymen from town had set up a rink that froze from December to February each year, complete with a couple of goals from Joe Louis.

“Whether it was pucks or tennis balls or tape balls, he’d be out there [shooting] all day,” Maureen said.

And even if he couldn’t make it outside—sub-zero temperatures aren’t uncommon in Michigan—he and Switzer would take mini sticks down to play in the basement.

As he grew up, he held onto his love. If he wasn’t playing, he’d check out a game on TV or go to watch his brother or father play. Before he really took to academics, he’d play with Xs and Os on a dry erase board, exercising his young hockey mind.

All the while, he was building up an astute knowledge of the game that allowed him to excel at each new level. He had help every step along the way. With Doug, Greg, and Patrick in the family, Christopher always had advice flowing to him, even if it was sometimes unsolicited.

“Every day they’re giving me different pointers. Sometimes I want it, sometimes I don’t,” Christopher said, laughing. “But they’re always good pointers. I really enjoy it, it tells me a lot.”

All of the Browns identify as smart hockey players, helped along by hard work to get there. That’s exactly what Doug believes is the most important factor at each level: “It’s an athlete’s IQ that helps propel them forward, helps them mature,” he preaches. “It’s back to being aware of your surroundings.”

That awareness is the thing Doug believes Christopher is best at. What’s Christopher like on the ice? A “cat-and-mouse” player, who is “quick, intercepting, counter-punching.” Off the ice? “Quiet and very aware of his surroundings. He’s very alert.” So really, in his father’s eyes, not much difference.

There is, though, plenty of difference in playing style between the two brothers. Patrick is more of a physically aggressive defensive player—“a wrecking ball,” as Doug describes him. Christopher is more skill-oriented, with more potential offensively.

In other words, Christopher embodies the quarterback persona that Doug also describes as being key for advancing to the next level. He knows what’s happening on all sides, meaning he knows where to be to snag a turnover or how much time he has before he must give up the puck. It’s that know-how and effort that made him one of just six skaters to take the ice in each of BC’s 39 games last season. He didn’t fill the statsheet (two goals and nine assists on the season), but he proved he could skate in the Hockey East.

And his improvement this summer may help him to break out this season.

“He’s added strength, and it looks like he’s added some confidence out there, as well,” Greg said. “I think he’ll be able to step into a much bigger role for the team this year.”

Don’t just take a Brown’s word for it.

“He’s been the biggest surprise for me early in camp,” York said. “Right from the first practice, we’ve said, ‘Whoa, he looks bigger, he looks stronger, he looks more skilled.’”

The combination of this physical step up and the early-summer exodus of upperclassmen will give Christopher a spot on the top power-play line, alongside Colin White and Ryan Fitzgerald. He is also projected to start the season at right wing on the second line with Graham McPhee and his weekly tennis partner Austin Cangelosi.

In fact, it was on the tennis court in high school that he first outwardly displayed his love for the place his family calls home. Christopher always wore the same BC ball cap throughout one season. Eventually, it became so sweaty and stained that his mother tried to get him to replace it. He wouldn’t do it.

“If you know Christopher, when he has his mind set, it’s very hard to change it,” Maureen said.

Above all else, he has had his mind set on playing hockey. Part of him is still that kindergartner with a speech impediment, saying all he wanted was to go to ‘Yo Lewis’ and skate. That may have been something of a second home for him then, but his real home was always meant to be the rinks at BC.

After all, it’s in his DNA. 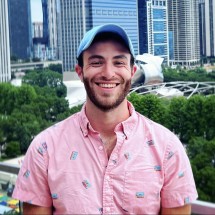