“Eradicate responds to what’s happening on campus in the moment, so it’s not necessarily like we’re planning on being around for forever,” Sriya Bhattacharyya, member of Eradicate and LGSOE ’16, said.

Last April, I met with three graduate students outside of Campion Hall under a warm, spring sun and budding cherry blossom trees. Shaun Glaze, LGSOE ’16, Chad Olle, LGSOE ’17, and Sriya Bhattacharyya, LGSOE ’16, had just created an infographic with the breakdown of AHANA students and faculty at BC, and I was writing an article about it. Little did any of us know that this would be our first of many interviews together, nor did I realized it would lead to the inception of Eradicate Boston College Racism.

Since our meeting, Eradicate managed to lead a wave of protests to oppose the lack of administrative initiative in addressing or even acknowledging institutional racism. At the same time, it created a supportive, inclusive, and tight-knit community for students who see and who face racism at BC.

The group walks in stride with movements occurring at other college campuses across the nation, including Yale University, Brown University, and the University of Missouri. Eradicate aims to go against the grain, to make people feel uncomfortable, to hold a mirror up to BC community members and ask them to really look at themselves and evaluate the ways in which BC institutionalizes racism. They dare to speak out against the University, often without the administration’s approval.

Eradicate’s tactic is not to be subtle. From flying a banner reading “Eradicate Boston College Racism” over the Commencement ceremony last May, to singing Christmas carols about white supremacy on BC’s campus, the group has become one of the most contentious, yet vocal and influential, student groups on campus.

Glaze, Olle, and Bhattacharyya met in Leigh Patel’s Critical Race Theory class last spring. They decided to take what they had learned in Patel’s class about racial justice and apply it to the BC community in the form of the infographic on racial inequality.

“As a teacher, as an instructor, that’s amazing to see—that people interact with some of the things that happen in a course and then run with it, move well beyond the course,” Patel said.

In the fall, Eradicate was confronted with more constraints from the administration, which provided an opportunity for it to critique the University. Members of the group distributed fliers that read “BC SILENCES ANTIRACISM” after the administration did not allow them to distribute a flier that promoted an upcoming lecture on race. This bold accusation by the group did not go unnoticed—the fliers were immediately removed from campus.

As Eradicate began to speak out in more prominent ways against the University, BC students began to take notice and joined the movement. The group currently has about 20 active participants and a broader scope of about 50 students who participate in its major events, such as protests.

Gloria McGillen, LGSOE ’17, who was classmates with Bhattacharyya, Olle, and Glaze, joined Eradicate because she believed in the importance of its message, and she wanted to support her friends of color who experienced racism on campus.

“I came to BC to be trained as a clinician … and if I’m not seeing that reflected in the institution that’s teaching me, then I think I have a responsibility to help speak out against that,” McGillen said.

While Eradicate stirs the pot on campus, it also stirs the pot during its monthly potluck dinner. The dinner, which is open to any and all students interested, provides students a space to engage in dialogue with other students about the racism they see on campus and how they believe it can be combatted.

“It’s not just doing activist stuff together,” Bhattacharyya said. “It’s also recognizing that being a student on this campus is hard, and we’re here for each other for that.”

A real turning point for Bhattacharyya, she said, was when she attended Modstock last year to hold up posters in protest of institutional racism. She was asked by a BCPD officer to leave, and when she did not comply, he put his hand on her, she said. For the next six months, Bhattacharyya feared coming to campus, especially when she saw a BCPD officer. While an investigation was ordered into the matter, the findings have yet to be released.

“There is a really remarkable consistency of the issues and frustrations and pains that people have, which I think speaks to the fact that the institutional climate is very similar across the two groups,” McGillen said.

While the University, for the most part, chose to publicly address racism with silence, Eradicate continued to scream and shout about institutional racism at BC.

In November, during the question-and-answer session following a talk given by the writer Ta-Nehisi Coates, 30 members of Eradicate stood up in the crowd with signs that said “Eradicate #BostonCollegeRacism” and wore duct tape over their mouths in protest of the institutional racism at BC. One of the members also took the stage, talking for 10 minutes about the inherent racial hypocrisy at BC.

In December, the group organized a protest during which members of the group began outside of the doors of a Board of Trustees meeting in Gasson Hall and then walked across campus, singing Christmas carols with altered lyrics, including “Leahy Baby” and “Walking in a White Man’s Wonderland.” This event was part of the group’s “12 Days of BC Racism” campaign, which was held over the 12 days before Winter Break. In addition to caroling, the group raised money from BC alumni, gave gifts to supportive faculty members, and distributed fliers that compared BC’s responses to racism to other universities’ responses.

Eradicate’s shouting has been heard across the country. It has been featured on NPR, and in The Chronicle of Higher Education, Inside Higher Education, and The Nation magazine. This summer, members of Eradicate will host a workshop on combating institutional racism on college campuses at the annual convention of the American Psychologists Association in Denver, Col.. The group will present its six-point “Tool Kit,” which is a guide for students interested in creating a movement on their own campuses.

There will be several thousand people from across the world at the convention, McGillen said, and many students who combat racism at other universities, including Missouri and the University of Kentucky, will be in attendance.

“It’ll be a good chance for us to continue deepening relationships with people like that and also helping bring new people into this movement,” McGillen said.

When I met with Eradicate last week, it was a bittersweet encounter. We convened in a lounge on the fourth floor of McGuinn. As each member walked in, he or she sunk into the couch with a sigh of exhaustion, the end-of-the-semester crunch taking its toll on everyone. When the conversation moved from papers and exams to Eradicate, however, smiling and animated faces replaced the sullen expressions of the over-worked students. We reminisced about our first meeting under the cherry blossoms and laughed about the number of emails we have exchanged over the course of the year—scheduling interviews and discussing Eradicate’s upcoming events. With some of the members of Eradicate graduating this year, we began to talk about the future of the group.

“Eradicate responds to what’s happening on campus in the moment, so it’s not necessarily like we’re planning on being around for forever,” Bhattacharyya said. “We’re not trying to institutionalize and become a body. It’s important that student groups form in a moment where there’s an important need to fill and to resist against, and I think as the University continues to display things that we can actively resist against then that’s what our work will be.” 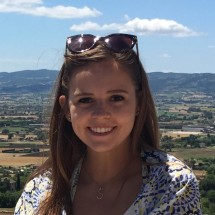