Anthony Perasso, LSOE ’17, sits in a folding chair, his laptop open. Molly Collins, MCAS ’17, his co-director, is beside him.

“A child named Inigo Lopez de Loyola is born into a wealthy Spanish family,” Perasso says, in his best Morgan Freeman impression. Out pops Michael Quinn, MCAS ’19, playing Ignatius, fully clothed and immediately posing as his statue out in front of Higgins Hall.

From the edge of the room, Collins starts adding direction.

“To the audience,” she tells him.

“Baby Inigo grew to be a young man who lived a lavish life of opulent pleasures. He engaged in intellectual pursuits, he enjoyed fighting for sport … ” Perasso says, as Tom O’Boyle, MCAS ’17, seated in front of a keyboard, starts picking at his guitar, giving the scene some rhythm.

“So when he’s saying that, the light is off,” Collins says to Harrington, who’s also playing Make-Out Girl. “You’re gonna come on while that’s happening, and your back’s gonna be turned.”

They re-set. Harrington walks in and makes out (or fakes out) with Ignatius, the spotlight on them.

“Inigo was a notorious rabble-rouser,” Perasso says. “In fact, according to some cursory research done on Google, Inigo is the only canonized Catholic saint with a violent police record.”

elcome to The Book of Carney. That name means many things—it’s a weird and silly history of a weird and overly serious school, a 90-page script with 12 original songs and five parodies, one of which is called “All Men Blow,” set to the tune of “Let It Go.” It’s a cast and crew of experienced performers and some relative theatre novices, rewriting lines and talking out the blocking as they go. It’s one last Boston College hurrah for someone who has seemingly been everywhere and done everything over the past four years—let’s call it Perasso’s unofficial senior thesis in the English, history, and theatre departments—with some of his best friends along for the ride.

Yeah, it’s all of those things. But most of all it’s a snapshot of what BC means, from its own historical roots in Ignatius and the Jesuits, to its cultural place in this city, and its students’ place in it.

Book is your classic story within a story. It starts with an incoming BC freshman, played by Lindsay Hyman, LSOE ’20, who gets the Book of Carney as a grad present from God. After an original song called “Where I’ll Go” (“I need a school that says premarital sex is a sin / With beautiful buildings, expensive food, and a shitty gym”) the show launches into the little-known and very fictional story of the not-actually BC founder Sr. Margaret Carney (played by Michaela Chipman, MCAS ’19), a spunky nun who spits bars and bashes the patriarchy as she vents her frustrations at her male partners in BC’s founding, Fr. McElroy and Fr. Fitzpatrick, both of whom actually existed and helped to found BC in the mid-19th century. (And there was actually a guy named Andrew Carney.)

The sexist Fr. McElroy is played by Meghan Hornblower, MCAS ’17, with Stephen Kiely, LSOE ’20, as the bumbling idiot sidekick Fr. Fitzpatrick. They also play Fr. Gasson and Fr. Newton, who come in later in the show. They allow Perasso to develop Sr. Carney as a vehicle for commentary on the sexist underpinnings of the Catholic Church—their antics form the basis of “All Men Blow,” for example. In some ways, Sr. Carney is an amalgam of any ambitious and frustrated nun, and how they might have been treated in that time period.

“To a certain extent, she really expresses a lot of attitudes that I think a lot of women at BC have, because it’s a complex relationship between a feminist and the church, not to say that they’re not reconcilable,” Chipman said.

Just as they squabble among themselves, the show also takes on Protestants’ discrimination against Catholics: the trio initially sets out from New York for Philadelphia, but, afraid that they’ll run into some WASPs, they decide to walk and accidentally end up in Boston instead. But the whole thing is also militantly unserious, leading to stage directions like this: “FR. MCELROY and FR. FITZPATRICK are passed out on the floor with a mess of beer cans around them. As the lights turn on, they slowly wake up. Meanwhile, SISTER CARNEY is already awake, nervously pacing and looking around while referencing a map.”

That all combines to form a very complex satirical landscape. Perasso’s best-known contribution on campus might have been his work as editor-in-chief of the fake newspaper The New England Classic, where he has spent years skewering BC for everything from its obsession with having nice grass to the eclectic personality of Steve Addazio. In Book, he’s doing the same thing, just on a much larger scale than ever before. In the show’s burning bush moment, God raps to Fr. McElroy about what he thinks BC should look like: “An administration that preaches and reaches for grace / Is silent on issues of race / An LGBTQ disgrace,” God tells him. Perasso is weaving together criticism, history, and entertainment, mocking orientation leaders and exploring hot-button social issues with the same breath. It’s not mean—it’s familiar. And true.

“I think the big takeaway, the point that he’s really trying to push, is ‘You see this thing that we see every day on campus, that people are constantly frustrated about and constantly talking about? This goes way deeper,’” O’Boyle said. “It’s the idea that so much has changed and nothing has changed at the same time.”

The jokes are relentless and pointed, and nothing is off limits (not even Spotlight). Take the opening scene, for example, which only gets more irreverent. Inigo’s antics continue with the same wry narration and absurd dialogue: he brawls with heretics (“Interested in bad boys? I just punched some non-Catholics in the name of God.”) and gets the ladies’ attention (“Oh, Inigo! Come forth and set our loins aflame!”), but famously ends up getting crippled by a cannonball and renouncing his ways (“I must relinquish my life of hedonism / And instead live a life of Adam and Eve-onism / Now I’ll never be an action hero like Vin Diesel / Can’t be fast or furious, I’m not that nimble / But I still want to devote myself to a cause / Hey, what if I was a Vin Diesel for God?”).

Since they started rehearsing in late March, the cast has gotten a new script practically every week, as Perasso continues to tinker with it. He just added the final song last weekend.

“It’s been a challenge, but very refreshing,” Chipman said. “It’s not the directors and the cast, we’re all a team … Anthony’s got a way of writing something that is him, and we’re expressing him, but it’s also us.”

In addition to writing it, Perasso serves as co-director with Collins, and O’Boyle is in charge of music, including the original score. Perasso contacted both of them around the fall of junior year, they said, when he had started thinking about writing the show and was trying to figure out how to put it on.

“It’s like a triumvirate,” Perasso said. “This is my first theatre production I’ve ever done, so I didn’t want to pretend that I know more than I do.”

Collins and O’Boyle described Perasso as an ideas guy. He’s used to writing words for people to read in an article, and they’re translating that style into writing for people to speak and sing. Perasso started writing it over the summer, jotting down lines, “like any dumb English major,” in a moleskine notebook during lunch breaks. He didn’t touch it during the fall, and then wrote it over Winter Break, reading a history of BC for inspiration. Collins and O’Boyle never really anticipated what it’s become.

“[When he first asked me] I was like yeah, sure,” Collins said. “Did I actually think it would get this far? I wasn’t that certain … I thought it would be fun to do a last hurrah with some of my buds who I’ve been friends with since the beginning.”

[aesop_quote type=”block” background=”#800000″ text=”#ffffff” align=”center” size=”1″ quote=”"I think the big takeaway, the point that he’s really trying to push, is ‘You see this thing that we see every day on campus, that people are constantly frustrated about and constantly talking about? This goes way deeper.’"” parallax=”off” direction=”left” revealfx=”off”]

For Kiely and Chipman, who have a lot of theatre experience, cutting and adding on their feet is a new experience. Collins and Perasso will provide direction as scenes continue in front of them, and O’Boyle will adjust or adapt the music accordingly (at first O’Boyle planned to just be somewhat involved with the music, but then Perasso kept writing songs for him to score. “Tom’s a hero,” Collins said). Collins, Perasso said, provides an extra layer of ideas, coming up with stuff he hadn’t thought of, and O’Boyle takes Perasso’s rhyming lines and puts them into a finished musical product. It makes for an organic, collaborative process, which Chipman said reflects the cast members’ different styles and also Perasso’s vision. Hornblower said that Perasso has been very receptive to feedback on how to make a joke land a little better. Sometimes the cast will be talking, and he’ll realize that something is funny and would fit well in the show.

“It was definitely very much like, ‘Here’s what I’m thinking, run with it and do whatever you want with it,’” O’Boyle said.

The Book of Carney, which runs on May 1 and May 2, is sponsored by the Musical Theatre Wing. Perasso said they were enticed by the idea of bringing in students from outside that bubble. Kiely and Chipman have a lot of experience in theatre, but some of the other cast members and musicians don’t, which in some ways is part of the goal.

“I think this campus doesn’t really foster a lot of opportunities for students to do things that they’re interested in in a more casual way,” Collins said.

Kiely recently delivered a line in rehearsal in a very different way from how Perasso pictured it—different, but better, he decided. Other shows, Kiely said, are much more set in stone.

“To take a backseat and watch other people do what they’re best at and bring themselves to the songs and the characters, to watch people add an element to a song that I didn’t imagine—it’s been really cool,” Perasso said.

Back in rehearsal, they’re onto scene three.

“I fixed the script, so now you can have the ‘Genesis’ lyrics, I’m just gonna send them to you,” Perasso says to O’Boyle. There’s a song at the end of the scene that isn’t quite ready to rehearse, so they’re going to skip it and just work on the blocking. In the show, God has just given the book to Hyman’s character, Katie the high school grad.

“You’re gonna be alone and you’re gonna sit down with the Book of Carney,” Collins says. “We can start that one until they come in. So you can just say, ‘Well, here we go.’”

“Well, here we go, the book that descended down from heaven from God for me to read and learn from so I can revive the legacy of Sister Margaret Carney. No big deal,” Hyman says. 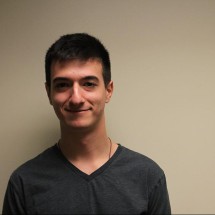