Amid the sounds of chit-chat, coffee makers, and blenders, “Lost in Your Light” came on over the loudspeakers in Fuel America in Brighton—prompting Maura Johnston to pause her train of thought.

“This is the collaboration between Dua Lipa and Miguel, and I love Miguel. I’ve seen him 26 times.”

“I interviewed him once too.”

This one interaction provides a glimpse into the part-time journalism professor’s jam-packed life of listening to, reading about, and writing about music. A freelance writer whose byline frequents Rolling Stone, The Boston Globe, and The New York Times, Johnston travels across state and country lines to watch, interview, and write about musicians—who in the past have included the likes of Dierks Bentley, Kelly Clarkson, and Michael McDonald.

Listening to music is a full-time job for Johnston, who spends around 35 to 40 hours a week jamming. It’s not a new occupation though: ever since she was a kid, Johnston religiously watched MTV and listened to Casey Kasem’s American Top 40 every weekend.

Johnston was never really a TV person—sitcoms didn’t catch her attention, and you probably wouldn’t spot her at the movies. But she was always completely fascinated by music and its ability to surround people and affect their moods.

As she grew older, Johnston grew interested in the ways critics were able to elevate and denigrate certain types of music. Johnston isn’t a fan of the writing of most early music critics of the ’60s and ’70s—calling it “wanky” and subjective to an “almost blinding” point.

“The stuff that’s being published now is so much better than the stuff that was published back then—just because there’s like a greater diversity of perspectives,” she said.

As a college student at Northwestern University, Johnston worked for the school’s newspaper and radio station. Upon graduation, she went to work at a hodge-podge of websites, including those for Time Inc., Barnes & Noble, and the MLB.

In 2006, she went to Pop Conference—a gathering of musicians, critics, academics, and music buffs held every year in Seattle—where she met fellow writer Brian Raftery. Impressed with Johnston’s knowledge of the internet, Raftery recruited her to help with founding a new music blog: Idolator.

“We kind of wanted to have the spirit of the British music magazines that were sort of on the cheekier side, like Melody Maker, or Select, both of which were huge influences of mine,” she said.

The initial ethos of Idolator, as she describes, was very confrontational and contrarian. Raftery left the blog in 2007, leaving Johnston to be promoted to head writer. At the time, much of the blog space had been consumed by indie rock and hip-hop, which Johnston says are two genres that are the easiest to write about and give “sonic context to.” She set out to give the blog a more pop-based focus.

“Pop was a really big kind of no man’s land back in 2007,” she said. “And I’d always been interested in pop, not just like what’s on the radio, but pop as a genre.”

Johnston worked at the site until 2009, and in 2011, she started working as the music editor for The Village Voice—a tenure that taught her important lessons about the toll inflicted by increased dependency on advertising and page views on the media.

“[The Village Voice owners] were really sort of prizing web traffic and making it paramount, and that was really frustrating for me because a lot of the ways that they did this were to exploit women or to write ignorant stuff that people would get mad at and click,” she said.

“It was just so exploitative and so counter to what I loved, because I had grown up reading The Village Voice too—it was something that I would read on the way home from concerts and going to the city on the train in high school and college,” she said.

So Johnston left the Voice in 2012 and, one year later, embarked on a media project that wouldn’t be dependent on “clicks.” In 2013, she launched Maura Magazine, a pop culture publication whose revenue was based on subscriptions from its readers.

“The common denominator in my relationship professionally with Maura—as a writer and as somebody who also edited for her—was that basically, above all, what mattered was integrity,” said Brad Nelson, the magazine’s copy editor and eventual managing editor.

Nelson says that at the root of all their interactions with Johnston is integrity. Every piece she writes ends with being the best version of itself it can possibly be.

The magazine’s offerings included “in-depth interviews with creators and innovators, incisive commentary on music, movies, sports, and the internet, and indulgent recipes for liquor-filled treats,” its website reads. Sometimes issues were centered around various themes—one week’s was George Michael, another’s the Michael McDonald song “What a Fool Believes.”

“No one was looking over our shoulders telling us that this content was good or would perform well,” Nelson said. “It was just about us, trying to get the best stories that we could and then shaping them into the best stories they could be.”

Running the advertising-free publication, unfortunately, proved to be unsustainable: It was hard to get people to pay for subscriptions, and Johnston did not have a benefactor, nor was she able to get grants to keep the publication up and running. So, after a two and a half-year run, Maura Magazine ceased publication.

“It shut down, but it was definitely a very interesting lesson,” Johnston said. “It’s such a volatile business right now. I mean, I really have to embrace that kind of ‘It failed, but I’m alive’ sort of thing.”

For people who are looking to go into this tough business, Johnston suggests being flexible, and she emphasizes that everything can be a learning opportunity.

“Media is in a really tough place right now,” she explained. “I feel like there are a lot of good people with good ideas at different places, but the pace of the market is very very ruthless, and very sort of like ‘quick-fix,’ and we need more time to figure stuff out.”

Johnston considers herself to be more of a critic than a reporter: Even though she has had the chance to interview some of her favorite artists, such as Greg Dulli of the Afghan Whigs, she admits that she still gets nervous when she interviews people.

When writing about music, her work is by no means limited to any particular form. Concert coverage, album reviews, Q&As with musicians, opinions columns, timely features—Johnston does it all. Every Friday, she works on Rolling Stone’s “New Albums to Stream Now,” a section in which writers and editors talk about new albums they’re excited about.

Johnston often laughs about the fact that her greatest preparation for blogging about music full time was when she was working for the MLB’s website. There, she had to be accurate while making quick judgments, so she quickly had to find out where she could go to get reliable information. While at MLB, she not only learned how to react quickly, but also gained confidence in what she was doing.

One of the bigger lessons Johnston learned in her career, she says, came as a result of a actually failing the application for that same job. To work for MLB.com, she had to take an edit test of her baseball knowledge—and she bombed it. But the company, still needing employees, agreed to hire her anyway.

“Because of that, I was like, ‘I have to get everything super right,’” she said. “So I double-checked, triple-checked everything, and that kind of mentality of like, ‘Don’t publish until you’re absolutely sure you’re right’ carried over into my music writing.”

In addition to learning to recognize the potential for learning opportunities everywhere, Johnston also has another tip for media hopefuls: Don’t be afraid to stand up for yourself.

“When you’re younger, especially in the digital space, you’re seen as having more authority because you’re more on the cutting edge,” she said.

Johnston thinks that there is a lot of bad digital strategy in the world, and often the burden of executing that strategy falls on the youngest employees.

Johnston also stressed that it’s important to have a personal life outside of the media.

“That’s the one great thing about living in Boston,” she said. “Living in New York, you can really caught up in lot of the day-to-day bullshit. But being in Boston is a nice remove from that.”

Johnston taught at New York University’s Clive Davis Institute of Recorded Music from 2010 up until 2013, when she came to Boston College as the inaugural Institute for Liberal Arts Journalism fellow. She currently teaches two courses in the journalism department: Writing about Popular Music and Journalism and New Media—the latter of which she has to redevelop the curriculum for every semester because the field is always changing. In addition to teaching, Johnston works with WZBC as a DJ and advisory board member.

“[Maura’s] observations on musical culture are really eye-opening,” said Nick Benevenia, a former student of Johnston’s, manager of WZBC when she joined the station, and BC ’14. “It has changed a lot of the ways that I’ve thought about different types of music, especially pop music and popular music.”

While working at BC and freelancing for various publications, Johnston continues to work on her biggest project at the moment: a critical biography of Madonna.

“I wasn’t allowed to listen to Madonna when I was young, so that’s the irony of all this,” she said. “I grew up in a very Catholic house—my mom did not like her attitude toward religious icons and objects. But she was somebody who definitely has reflected and carried forward a lot of the pop ideals of the post-MTV era.”

The book, she says, is going to be a kind of history of pop in the MTV era told through the eyes of the superstar’s career. In it, she is going to examine some of the subconscious sexism surrounding female pop stars, which still manifests itself in pop culture today.

Despite the pleasures of writing a book, traveling far and wide for music festivals, and getting to interview popular artists, Johnston says that the most exciting part of her job is often something much simpler than that.

“Sometimes the thrill is just like hearing a record that you fall in love with right away,” she said. “And you’re like, ‘Oh my God, I can’t wait to let people know how great this is.’”

When summarizing the lessons she’s learned in life as a freelance music journalist, Johnston began with a laugh.

“Don’t be afraid to chase down invoices,” she said. “I’m just kidding. I’m actually not kidding.”

“Keep your ears open, keep your eyes open, be flexible,” she continued on to say. “Go see the opening band, even if you don’t think that you want to because they might not be the best thing that you’ve seen. And if they’re not, then go hang out at the bar area, play pinball.”

“Always be open to possibilities—that’s pretty much it.” 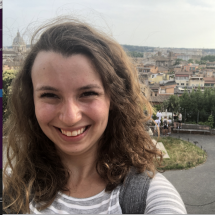